The day has finally arrived! Guinness World Records 2020 has launched around the globe today, and the electrifying cover is just the start of what’s new in our latest edition of the record-breaking annual. 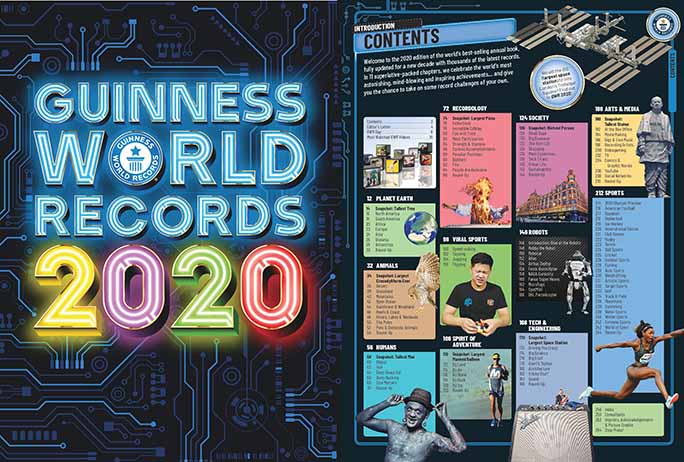 We gave you a taste of what to expect in our trailer, which exhibited awesome feats found in the book, from robots, to fire-eating to ferocious prehistoric crocs.

But what are the actual titles of these records, who holds them and, most importantly, where can you find them in the 2020 book? See below for an extensive list of the record holders that appear in the trailer and find out a little more about them, their amazing achievements, and how they could power your curiosity and inspire you to break a record of your own. 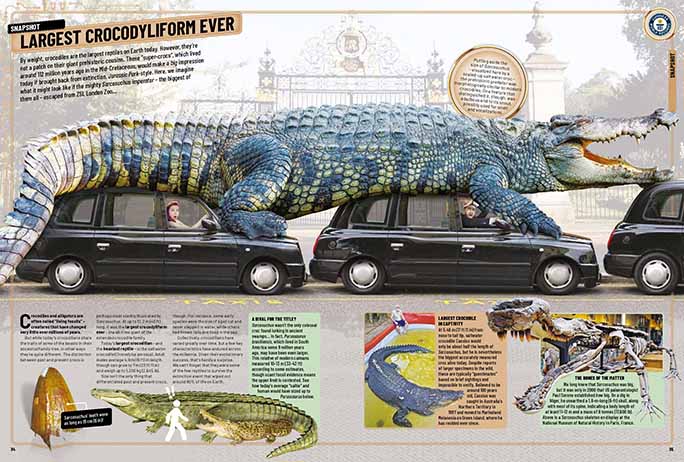 One of the most striking shots in the trailer is the giant crocodile that crushes our Editor-in-Chief – turned cab driver – Craig Glenday.

This colossal croc is an artist's impression of the mighty Sarcosuchus imperator, a prehistoric species of crocodile that lived around 110 million years ago. Sarcosuchus weighed 8 tonnes and grew to about 11–12 m (37–40 ft) long – about the length of three black cabs (see what we did there?) making it the largest crocodyliform ever. This record-breaking reptilian is brought to life by a special Snapshot spread in the book, which can be found on pp.34–35. 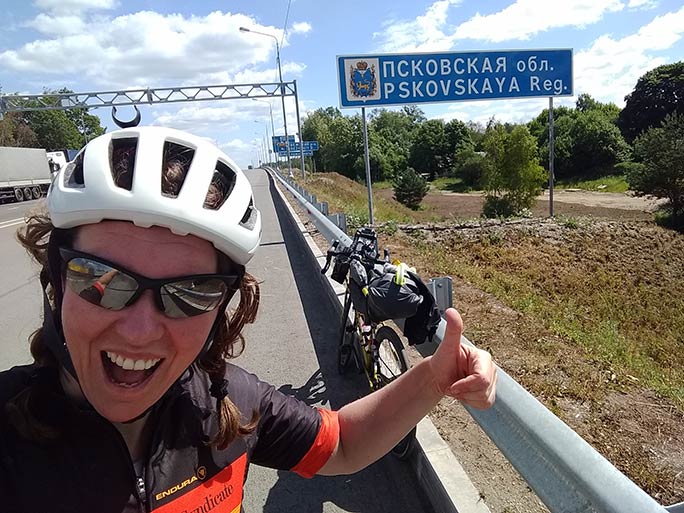 Seen zooming across the screen as a cycling icon, Jenny Graham (UK) features in the trailer due to her fastest circumnavigation by bicycle (female). Jenny’s curiosity, spirit of adventure and determination gained her a place in the GWR 2020 book, after she cycled some 29,000 km (18,000 mi) in 124 days 11 hours. You can find out more about her incredible feat in the "By Land" feature in the Spirit of Adventure chapter (pp.112–13). 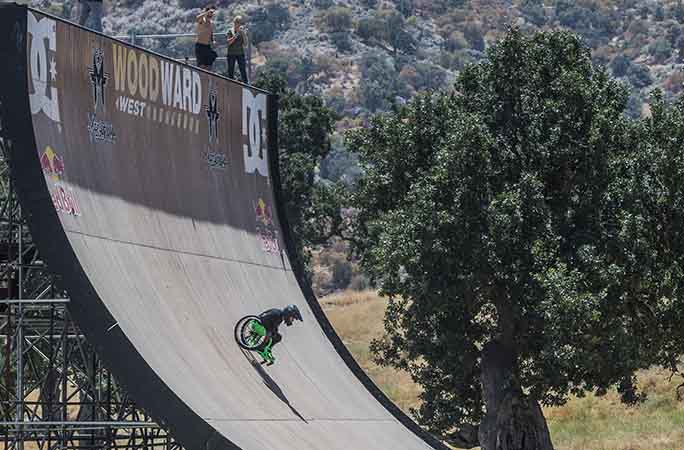 Adrenaline junkie Aaron "Wheelz" Fotheringham (USA) soared into this year’s book (and our trailer) with the farthest wheelchair ramp jump, covering an impressive 21.3 m (70 ft). You can find out more about his inspiring record and others like it in our "People are Awesome™" feature (pp.94–95), inspired by our record holders that have appeared on People are Awesome’s channels.

Though Lucky Diamond Rich (AUS, b. NZ) has been the most tattooed man for more than a decade, our illuminating new imagery for the 2020 book sheds new light on the long-standing record. His body is scanned in our trailer, showing his total tattoo coverage from head to toe. The chainsaw-juggling, unicycling and sword-swallowing record-setter can be found ushering in our Humans chapter (pp.56–57), with a reflective portrait. 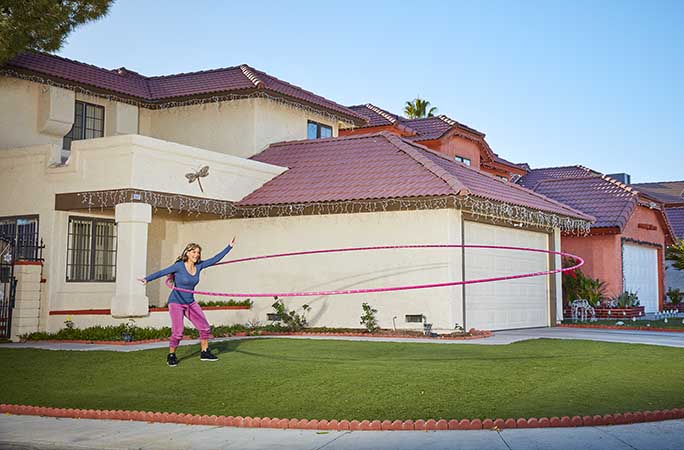 You may have spotted a rather large hula hoop being spun in the trailer, which is Getti Kehayova (USA) spinning her way into GWR 2020 with a 7.1-m (17-ft) hoop. In our "Giant’s Toybox" feature (pp.178–79), you can find out more information about Getti’s record, including the fact that she isn’t the first in her family to hold a GWR title…! 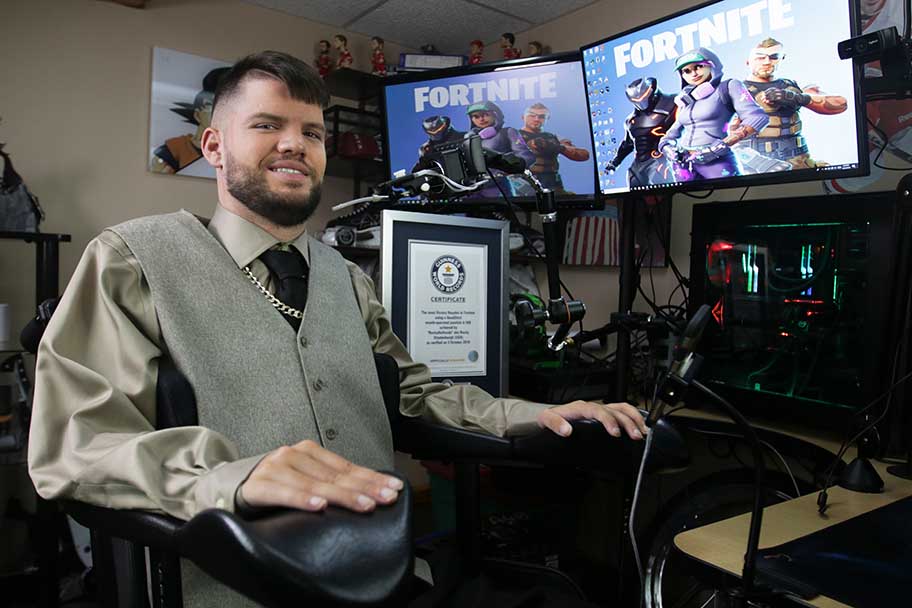 Most Victory Royales in Fortnite using a QuadStick mouth-operated joystick

PC gamer "RockyNoHands", aka Rocky Stoutenburgh (USA), has set historic Fortnite records using a mouth-operated joystick. Rocky was left quadriplegic after a serious fall, but didn’t let that stop him from pursuing his passion for gaming. You can read about Rocky’s levelled-up records in our dedicated Fortnite feature (pp.202–03). 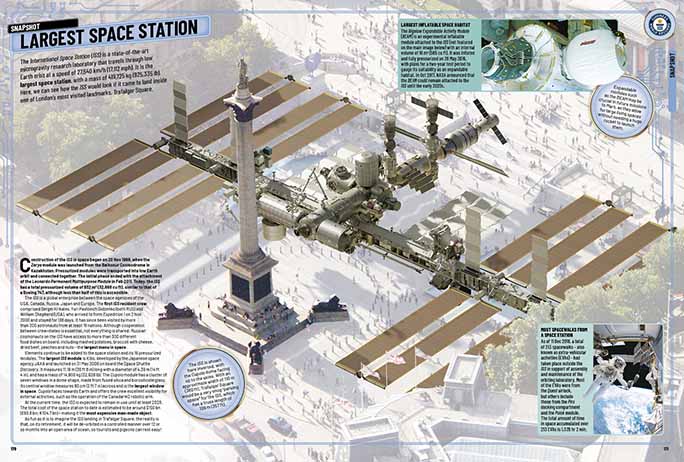 The International Space Station (ISS) can be seen "landing" in Trafalgar Square in the trailer to illustrate just how large it is. The largest space station in the world – or rather out of it – stretches 109 m (357 ft) across and is made up of various modules. This is shown in the Tech & Engineering Snapshot (pp.170–71), where you can also find loads of information about the construction, maintenance and development of the monumental space habitat. 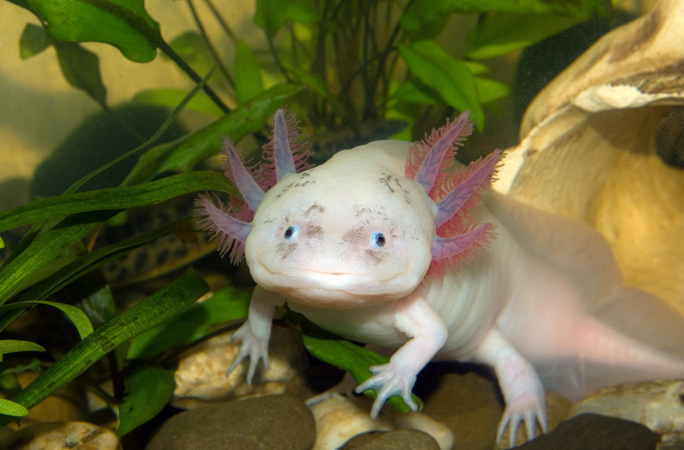 The seemingly smiling, pink creature that bobs into the trailer is the axolotl (Ambystoma mexicanum). Also known as the Mexican salamander, it holds the record for the largest amphibian genome. Find out more about this abnormal critter and other fascinating creatures in our Animals chapter – the axolotl stars in the "Rivers, Lakes & Wetlands" feature (pp.48–49).

The striking footage of lightning over a lake in the trailer represents the location of the world’s highest concentration of lightning. In Venezuela, over Lake Maracaibo, you can expect to see up to 250 lightning flashes per square kilometre each year. You can find out more about awesome natural phenomena from the region in our "South America" feature (pp.18–19). 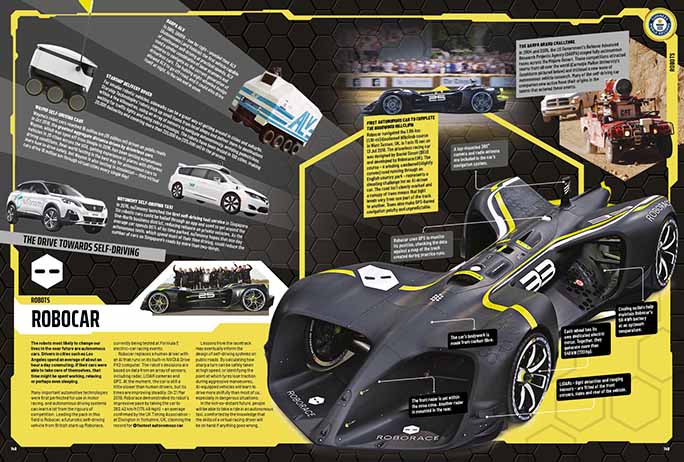 As part of our Robots section in the book, you can find the sleek and stylish Robocar (pp.148–49), which is the fastest autonomous car. It can reach staggering speeds of 282.428 km/h (175.493 mph) and was created by British start-up Roborace. You can find out all about the structure and cutting-edge features of this speed machine, as well as other amazing robots in our dedicated chapter. 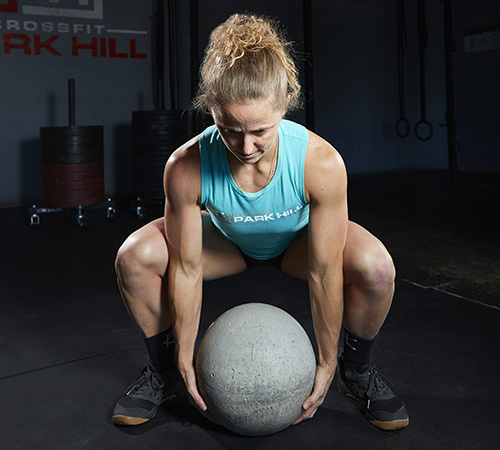 Most weight lifted by Atlas stone lifts in one minute (female)

CrossFit athlete Michelle Kinney (USA) holds the record for most weight lifted by Atlas stone lifts in one minute (female) and shows off her superlative strength in the trailer. The combined weight of the Atlas stones were 539.77 kg (1,189 lb 15 oz). Her awesome power is featured in the "Strength & Stamina" spread (pp.84–85) alongside fellow athletic record holders such as Iron Biby (see below). 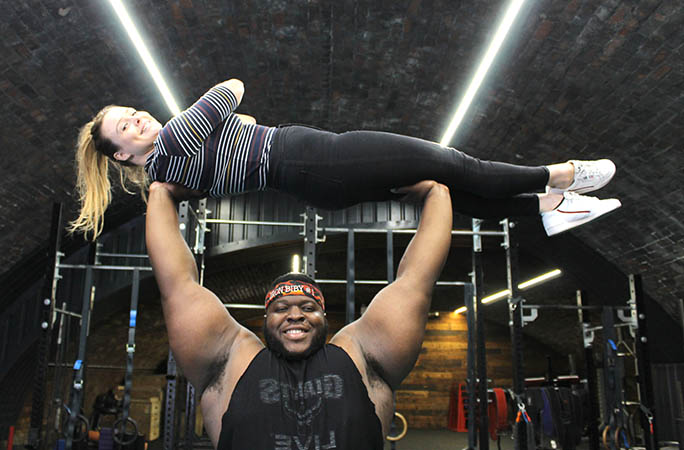 Most overhead presses of a person in one minute (male)

"Iron Biby", aka Cheick Ahmed al-Hassan Sanous (BFA), achieved the most overhead presses of a person in one minute (male), with a whopping 82! Born in Burkina Faso, Iron Biby is a competitive strongman who specialises in the overhead log lift. 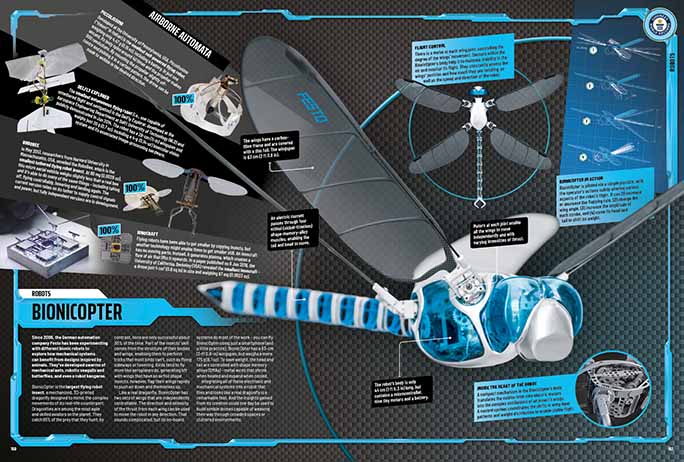 The zooming insect you may have spotted in the trailer is actually a record-breaking robot! The BionicOpter, designed by FESTO in Germany, is the largest flying robot insect. The robotic dragonfly has a wingspan of 63 cm (24 in). Find out everything about this nature-inspired machine on pp.150–51. 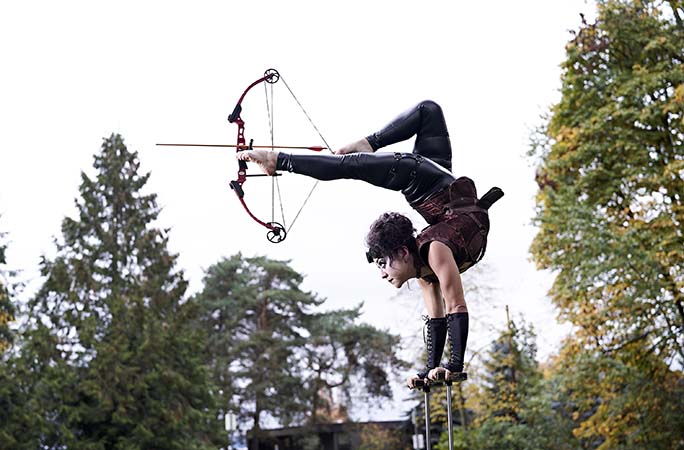 One shot sure to have caught your eye is a woman shooting an arrow – using her feet! Brittany Walsh (USA) holds the record for farthest arrow shot using the feet hitting the target from a distance of 12.31 m (40 ft 4.6 in). Brittany appears in the "Fantastic Feats" feature (pp.88–89), alongside many others with extraordinary talents. 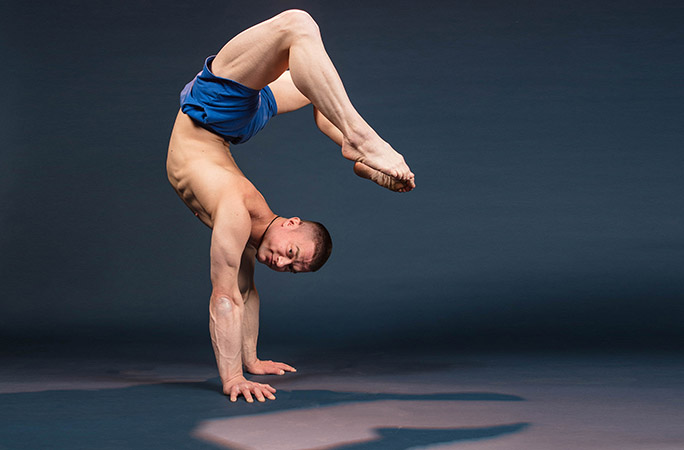 Another record holder that can be found in the trailer and on the "Fantastic Feats" spread is Jamie Stroud (USA), who secured the record for longest duration performing a hollowback handstand. He managed to hold the pose for an impressive 60.03 sec. 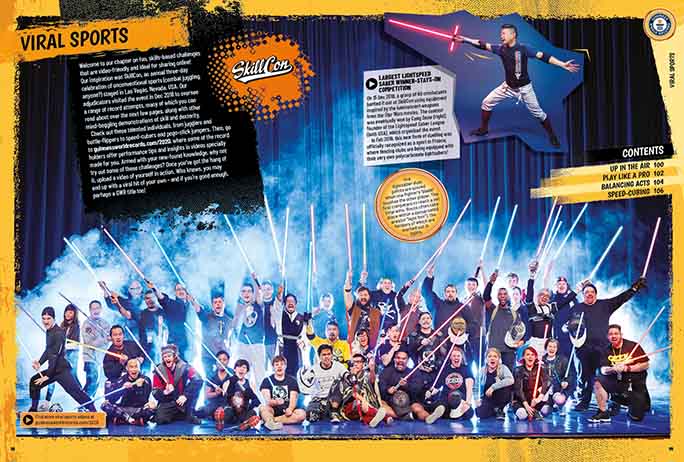 Also featured in the trailer is the largest lightspeed sabre winner-stays-on competition, which is the opening image for our new Viral Sports section. This chapter includes many different types of records you might typically see on YouTube and social media, and each spread has a "Do Try This at Home" challenge, so you can test out your own record-breaking abilities at home! 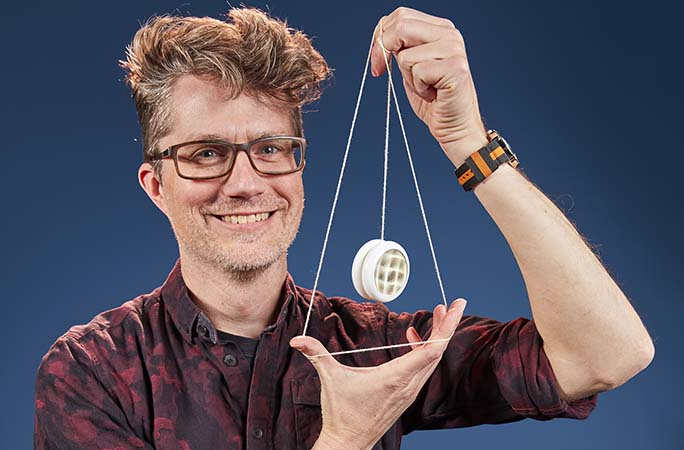 Farthest distance to "walk the dog" with a yo-yo 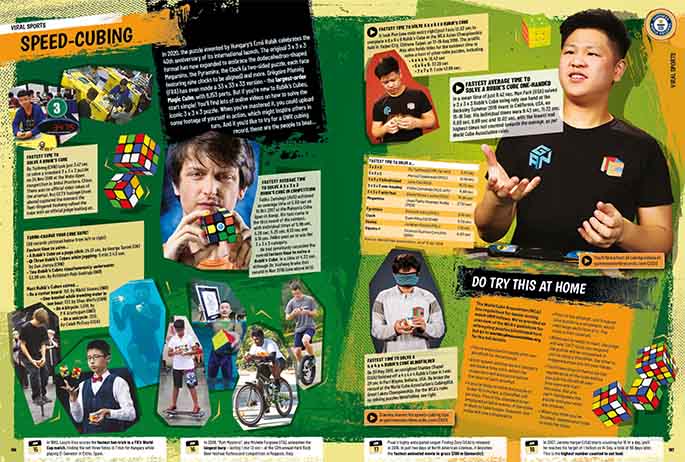 You may have spotted a multi-coloured cube spinning in the hands of a determined cuber towards the end of the trailer. That cuber was none other than multiple record holder and Rubik’s Cube speedsolver legend Max Park (USA). He holds records such as fastest average time to solve a Rubik's Cube one-handed. Find out the full list of records Max holds, as well as reading about other Rubik’s cube masters, in our "Speed-cubing" feature (pp.106–07). 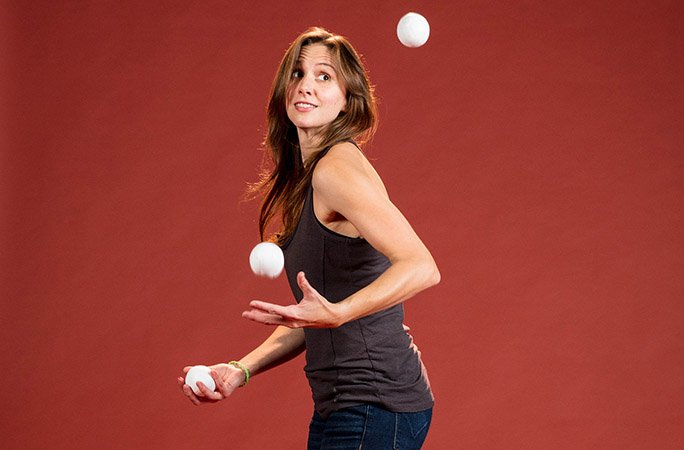 Most juggling tricks in one minute (three balls)

Another star from the Viral Sports chapter is juggler extraordinaire Taylor Glen (USA), who exhibits her skills in the trailer. She holds the record for the most juggling tricks performed in one minute with 39. Check out her top juggling tips on pp.100–01.

Most juggling back-cross catches in one minute

Along with Taylor, Matan Presberg (USA) also features in both the trailer and the book’s "Up in the Air" spread. He holds the record for the most juggling back-cross catches in one minute by an individual with 162 catches. 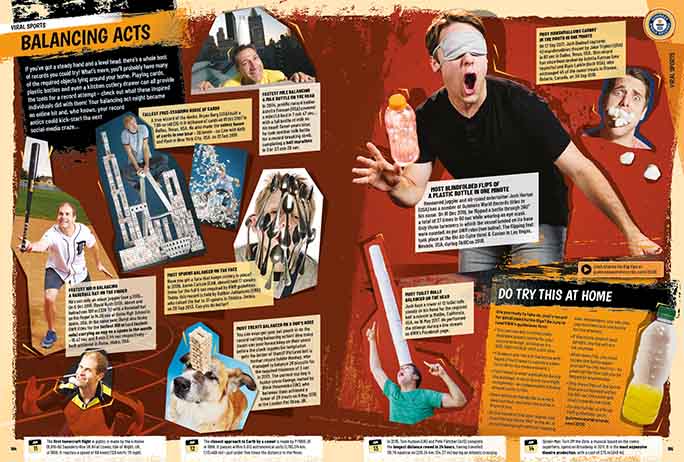 Most blindfolded flips of a plastic bottle in one minute

Our last Viral Sports spread is "Balancing Acts" (pp.104–05), featuring Josh Horton (USA), a renowned juggler, entertainer and multiple record holder. Catch him in the trailer and GWR 2020 for the most blindfolded flips of a plastic bottle in one minute – and try the record at home with the "Do Try This at Home" challenge! 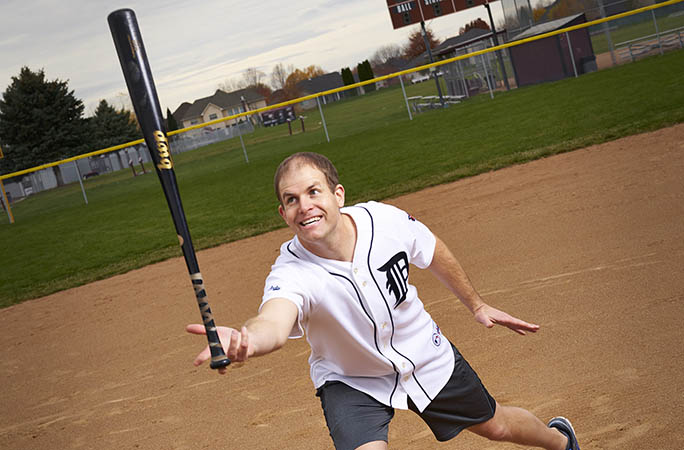 Fastest 100 m balancing a baseball bat on a finger

No stranger to the record books, serial record-breaker David Rush (USA) can be seen in the trailer and on the "Balancing Acts" spread with his record for the fastest 100 m balancing a baseball bat on the finger, clocking a time of 14.28 sec. 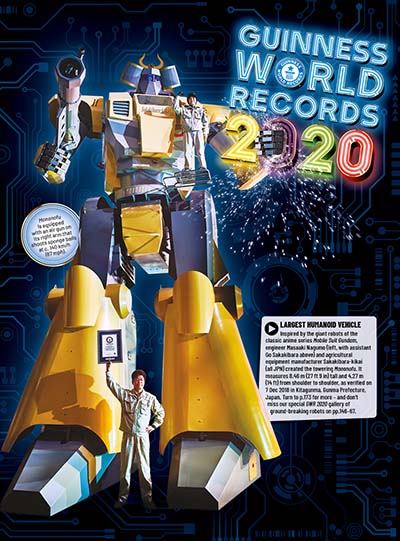 A snippet of a rather large Transformer-looking mecha can also be seen in the trailer. This is actually the record for the largest humanoid vehicle, created by Sakakibara Kikai Co., Ltd (Japan). You can find this record on the very first page of the book! 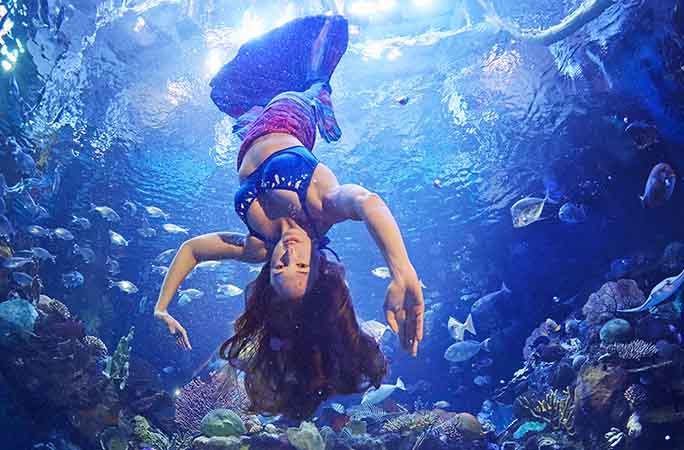 Most 360° downward spins underwater in one minute

You may have caught a mesmerising (albeit brief) glimpse of a mermaid in our trailer… you weren't imagining it! Find out more about real-life mermaid Ariana Liuzzi (USA) in the Recordology chapter's "Round-up" (pp.96–97). Ariana achieved the most 360° downward spins underwater in one minute - 32. 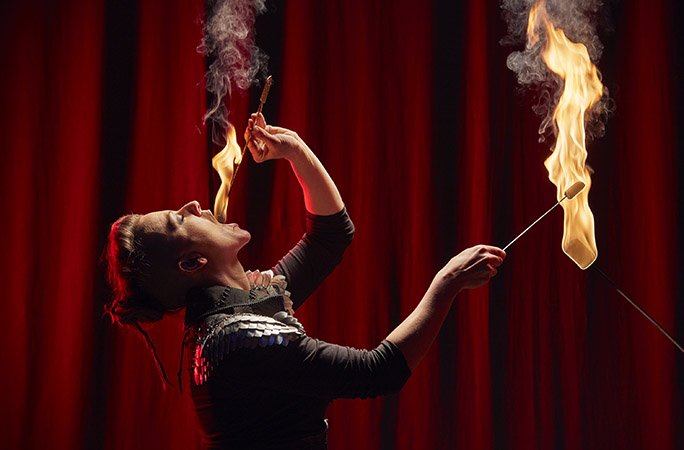 Most fire-eating extinguishes in one minute

Last but certainly not least is performer Isobel Midnight (UK), who is shown in the trailer just as she’s about to swallow a fiery torch! She holds the record for most fire-eating extinguishes in one minute, putting out an impressive 78 flames with her mouth. If this has got your curiosity burning, head straight to the "Fire!" feature (pp.92–93) in GWR 2020, which focuses on records set at London's Fire School in 2018.

Meet more of the record holders that appear in GWR 2020 in our video below!