He doesn’t just build arms for himself though. David is on a one man – and one hand – mission to make his LEGO® prosthetic arms widely available to all those in need. David was born with Poland Syndrome, a condition which caused his right arm and pectoral muscle to not develop fully.

Being different to other children was hard for David, but it didn't knock his confidence. Instead, it fuelled his dreams.

After becoming obsessed with building things, David created his first LEGO® arm at age nine, although it didn’t work properly as it was too heavy.

"LEGO® was my first toy as a kid, it felt that you could build an infinite amount of things," he says. "Imagination was the only limit!"

It was entirely made using parts from a LEGO® Technic Rescue Helicopter set (#9396). 🚁 "I wanted to see myself in the mirror like I see other guys, with two hands." 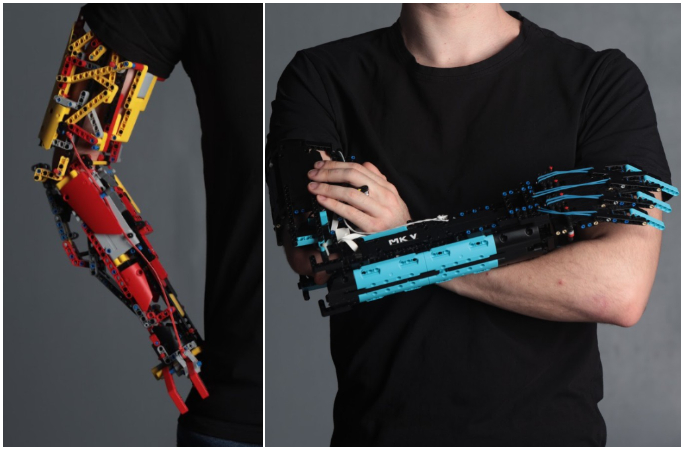 David’s newest model, the blue MK-V, is even cooler! It’s motorized and has five fingers that David controls by making small movements with his upper arm.

"My first model isn't motorized, I control it with my muscles and it becomes a bit painful once you spend a long time with it. Good thing is, the MK-I is strong enough to support my weight when performing some push-ups!" David said.

“[The MK-V] is the most comfortable prosthetic of my models and I don't need to use my muscles to lift something. The servo motors do it for me!” 💪 David studies bioengineering at university and his goal in life is to make prosthetic arms that are affordable for everyone.

The news of his Guinness World Records title reached the mother of Beknur, an 8-year-old boy who doesn’t have developed limbs. After contacting David, they travelled to Andorra to meet him, where David built two LEGO® prosthetic arms for Beknur.

It didn’t take long for little Beknur to master his new arms. Now he can play on his tablet and pick up small objects (like other bits of LEGO®!). 😊

"All your dreams can be fulfilled if you want them very strongly. You just have to fight for them." David has lots of ideas for future prosthetic arms. 💡

His main goal for the the MK-VI is to be able to move the hand and elbow separately.

He hopes to make the world a more friendly, accepting and tolerant place to live in. 🌍