Meet the 12-year-old girl who's taught dogs how to conga and more!

12-year-old Alexa Lauenburger from Germany is a dog-trainer and a rising star.

She won Das Supertalent (Germany’s equivalent of Britain's Got Talent) in 2017 (aged just nine!), received a “golden buzzer” from Ant & Dec on Britain’s Got Talent: The Champions in 2019 and just last week made her US debut, appearing on America’s Got Talent: Champions. She's been quite busy recently 😅

Now to top it all, she's set three Guinness World Records titles. All this, and incredibly she is still only 12 years old!

For those that somehow may have missed her, Alexa’s act has nothing to do with singing or telling jokes.

During her performance, Alexa is joined on stage by EIGHT dogs: Emma, Jennifer, Katy, Maya, Nala, Sabrina, Sally and Specki. 🐕🐕🐕🐕🐕🐕🐕🐕

Together, they put on spectacular tricks! 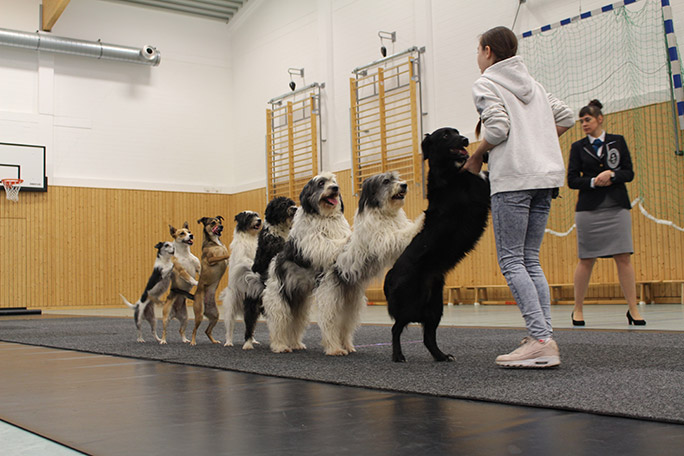 Convinced that Alexa and her talented hounds must have some records in them, a team from Guinness World Records paid a visit to northern Germany to see them in action.

Under the watchful eye of an official GWR adjudicator, Alexa and her dogs added three amazing records to their ever-growing list of triumphs.

Most dogs in a conga line: 8. This show-stopping record was achieved by Alexa and eight of her hounds (the family has 13 altogether). The first dog in the line (Sally), leaning on Alexa, had to cover a minimum distance of 5 m (16 ft 5 in) in conga formation, while the others had to maintain paw-to-back contact with the dog in front for the duration. 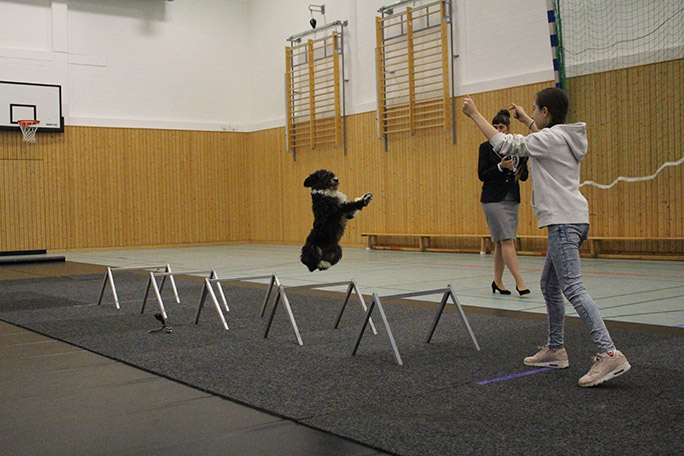 Fastest time to jump five hurdles on hind legs by a dog: For this record, Emma was the dog that rose to the occasion – quite literally! More kangaroo than dog, she cleared five hurdles in a speedy 5.66 sec on her very first record attempt. What a pro. 🦘️

Fastest 5 m backwards walk by a dog: Jennifer took centre stage in this record, which as the title suggests, involves the dog moving in reverse. The pair made it look simple, with Alexa steering her over the finish line (using just vocal commands) in a mere 6.73 sec. 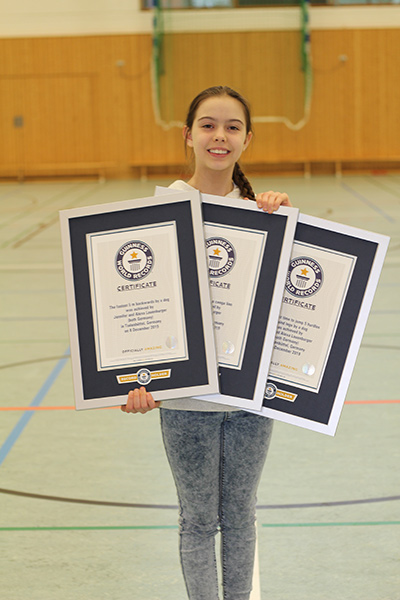 Alexa first started to properly train the dogs when she was around five years old. Though apparently at the age of just one she was already attempting to give commands!

Alexa told us: “We are with the dogs 24/7. As soon as I come back from school, after I’ve done my homework, I quickly eat something and go to see them. We basically spend every free minute with the dogs.

“It’s really important when you want to teach a dog to find a trick that suits the dog.” 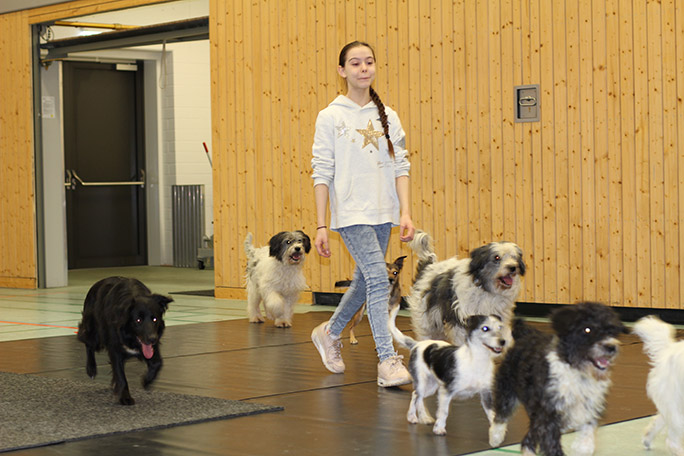 After so much success at such a young age, how does Alexa feel about becoming part of the Guinness World Records family? “I am very proud of my dogs that they managed to break that many records. Back home, they will all be rewarded.

“I’m going to hang the Guinness World Records certificates in our living room!”

As for the future, Alexa knows exactly what she is aiming for: “I plan to invent new tricks and teach them to my dogs, and I hope to perform on more shows. When I’m grown up, I want to open a dog school.”

Alexa isn’t the only “dog whisperer” in her family.

Her dad, Wolfgang, is also a professional trainer and entertainer, who actually grew up in a circus. 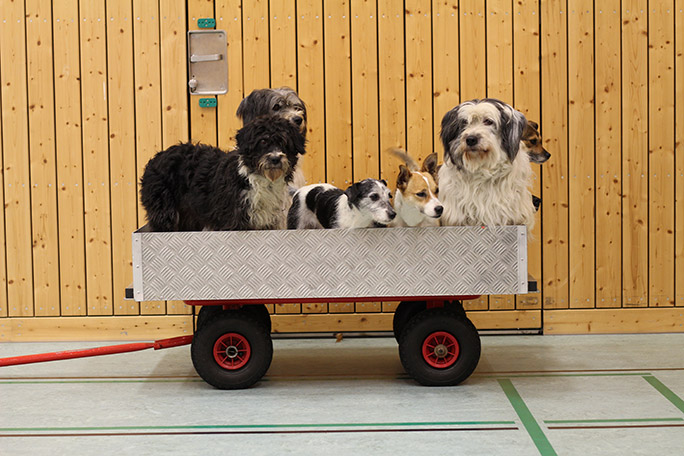 In fact, her father was Alexa’s main inspiration when she decided to try out a few tricks of her own.

Anyone who has tried teaching a pet to perform a trick – even simple ones like “lie down” and “wait” – will know just how difficult it is getting one dog to focus on the task at hand.

So imagine how hard it is to coordinate as many as eight dogs simultaneously!

Proving that record-breaking runs in the family, Wolfgang successfully achieved two titles himself on 8 Dec 2019. 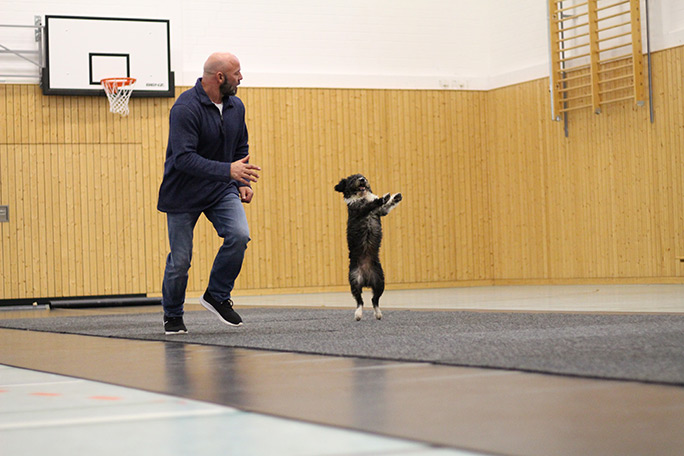 Fastest 10 m on hind legs by a dog: This one was always going to be a challenge. The existing record, achieved by Rayner Fredrick (USA) and his Cavapoo Oliver already stood at a brisk 3.21 sec, set in 2018. Emma stepped up her game once again, smashing the record with a lightning-quick dash of 3.05 sec!

Most spins by a dog in 30 seconds: With an already high mark of 32 to beat, achieved by the UK’s most prolific dog-trick record holder – Rachael Grylls – along with her Jack Russell Joe in 2019, Wolfgang and Maya had a tough act to follow. But the pair completed a dizzying 43 spins in half a minute. 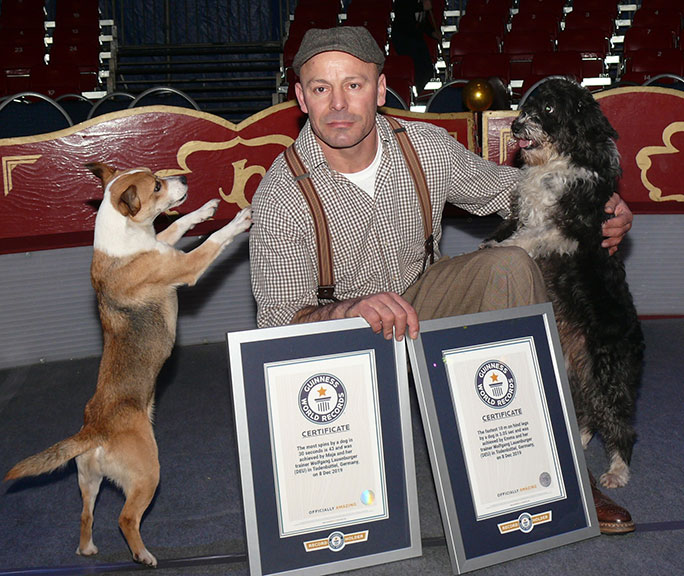